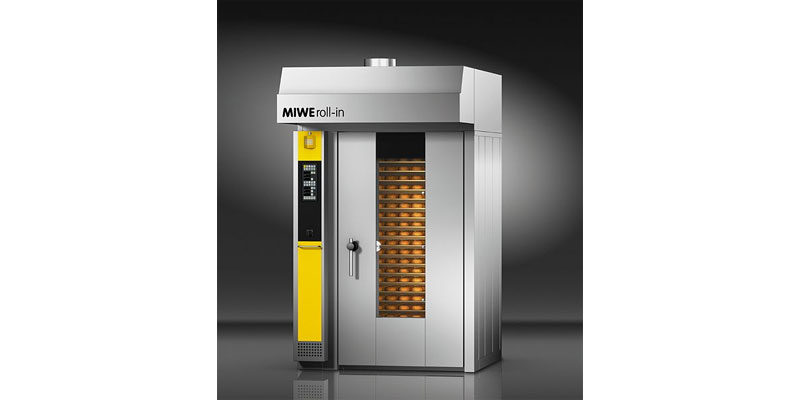 Buying what is usually the biggest and most important piece of equipment for a bakery – the oven – can be a daunting task. It is a decision most bakers have the chance to make perhaps only two or three times during their career. The wrong choice and the consequences can be personally and financially traumatic.

The oven is at the heart of the bakery and now could be an opportune time to make this investment particularly if you run a growing bakery and are looking to refurbish, diversify product lines or simply expand operations. If a quality convection bake or batch after batch is required then rack ovens provide the answer.

An energy saving rack oven, which was lauded for its flexibility and  energy efficiency following rigorous trials in a number of German bakeries,  was recently launched in the UK and Ireland.

The new, specially developed  MIWErollin e+ is supplied and maintained  by Epsom-based European Process Plant. Potential energy savings of up to 25% were reported by some bakers involved in the trials.

MIWE’s roll-in ovens with their patented air control system have been setting rack oven standards in bakeries all around the world for over 40 years.  A number of years ago the company implemented a continuous development programme which had reducing energy costs high on the list of priorities.

This, however,  was not enough for the development team at  MIWE and they set themselves the task of producing an easy to-use,  even more efficient oven which was not only economical but gave uniform, first class baking results for a wide range of products from crusty rolls to delicate confectionery.

The result is the impressive technologically advanced MIWE roll-in e+ which circulates over 30% more air more sensitively than its predecessors in up to nine stages.

EPP’s managing director outlined the results of the recent trials. “Many bakers reported more uniform colour, a shinier crust and  what has been described as a  ‘more beautiful crust crack’ from their roll products.”

“They were also very impressed by the oven’s increased steam capacity and its ability to quickly recover to its start temperature. At the most this is just three minutes. MIWE’s  engineers have also worked hard to improve the air conduction of the oven and  this  has made it possible to bake at lower temperatures and therefore helps bakers cut energy costs.

“One baker who already had a MIWE rack oven reported that the rolls baked in the new MIWE roll-in e+  stayed fresher for longer. After carefully measuring energy usage and the exhaust gases he calculated energy savings of 22-25 per cent. Another baker cut his steam use by up to 33 per cent.”

The new oven has an ingenious heating gas system with an additional flue gas duct to provide steam heating. This results in an even greater combustion efficiency of over 90%. The exit temperature of the  flue gas is up to 50OC below that of the baking chamber which further minimises the already low stack loss.

Bakers have also been impressed by the MIWE roll-in e+‘s new door. It is easy to open and, in particular  to close – something which cannot always be said for rack ovens. Perhaps more importantly easily adjustable rubber seals attached to the door ensures it is steam proof.

The MIWE roll-in e+ which is suitable for rack trolleys of all heights up to 1980mm  is supplied  with the  MIWE TC Touch Screen display as standard. This is easy to operate – a touch of the finger on the screen is all that is necessary.

The size of the display (800 x 480 pixels) means that  it can be easily read from a distance. The only additional operating element of the control system is also a new multi-function key sensitive to touch already from a distance similar to the clickwheel of an Apple iPod, that mainly serves as Touch-Sensor. It is built without protruding parts and is moisture-protected and therefore ideal for  in bakeries. A USB port is mounted on the front, and provides a quick and simple way to download data.  An Ethernet-interface is already installed while bluetooth WLAN-connections can also be included. This means the oven can easily  be integrated into a current network without any problem.